DO YOU REALLY KNOW YOUR CONSTITUTION?

DO YOU REALLY KNOW YOUR CONSTITUTION? 'WHAT DIFFERENCE DOES IT MAKE!?' TO DONALD? TO HILLARY? TO YOUR CHILDREN? 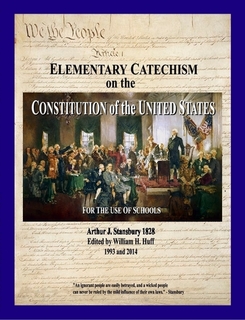 This brand new edition can be yours for the timely price of just $17.87 + s&h.  [Right now that's about 1 Silver Dollar]

If you search the web you will see Legion variations on this old favorite. But none will compare with the LEXREX version, because they all lack the context of this edition with its extraordinary insights and documented corrections [Stansbury was handicapped because Madison's Notes were being kept secret until 1835 - seven years after the first and only edition by Stansbury]. Just take a look on Amazon, Ebay or Google - search for the term "Elementary Catechism" in any search engine. I just saw 4340 page hits on Google alone. You can see what the original looked like at https://archive.org/details/elementarycatech00stanrich

Read more: DO YOU REALLY KNOW YOUR CONSTITUTION?

[THIS IS AN ARTICLE WRITTEN IN 2008. CHANGE THE NAMES, BUT REMEMBER WHAT RON PAUL WAS OFFERING US - NOT A PARTY-LINE BUT THE RULE OF LAW. As you read think about the natural versus unnatural categories within the body politic. Will you be happier under a Trump presidency or under another Clinton? Which one would be less intrusive; oppressive?]

"Men by their constitutions are naturally divided into two parties:

It came without ribbons

The Last Words of David

God is the Only True Leader of the Free World.

Here's wishing you all the best to the extent that you obey the Constitution and your Maker.

"He that ruleth over men must be just, ruling in the fear of God.
And he shall be as the light of the morning, when the sun riseth, even a morning without clouds;
as the tender grass springing out of the earth by clear shining after rain.
Alleluia. Amen."

Congratulations Mr.Trump - When you take that Oath this is what you are signing up for: An Important Distinction: Democracy versus Republic

...The United States shall guarantee to every State in this Union a Republican Form of Government,.." Article IV, Section 4

[As the truly Fake news outlets, the de facto government and academe continue to misrepresent this contrast between two antithetical Forms of government, it becomes more and more important that all truth seekers understand and articulate these distinctions and teach them to our children. The text below is from The American Ideal of 1776 by Hamilton Abert Long, the great American Patriot Attorney who left his law practice to make it his life-long battle to save the Republic from the dangers of Democracy as a form of government in order to prevent the tyranny of the majority.]

It is important to keep in mind the difference between a Democracy and a Republic, as dissimilar forms of government. Understanding the difference is essential to comprehension of the fundamentals involved. It should be noted, in passing, that use of the word Democracy as meaning merely the popular type of government--that is, featuring genuinely free elections by the people periodically--is not helpful in discussing, as here, the difference between alternative and dissimilar forms of a popular government: a Democracy versus a Republic. This double meaning of Democracy--a popular-type government in general, as well as a specific form of popular government--needs to be made clear in any discussion, or writing, regarding this subject, for the sake of sound understanding.